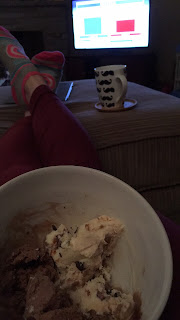 So, I don't know why I'm so surprised by the outcome of this election. And I don't even mean that Trump won! ha. I mean that it's completely obliterated some of my relationships. Maybe obliterated is too strong of a word - but it's definitely taken a toll.

I watched last nights events unfold in the comfort of my own insane living room. Tuesdays are my days off so I made a point of soaking it all in & really reflecting on how important this election was. I decided to run to my polling place, which is literally 4 blocks from my house - but I ran a route that ended up being 3 miles and some change. While running I heard so many good songs. Songs that I seriously thought were signs of what was to come that evening as the results rolled in. I felt all empowered as I ran. I even ran a bit faster than normal. I really felt confident in my candidate winning.  I kept asking my husband all week "What should we have for dinner on election night? What kind of food is election-y?" (I mean, who says that? What does that even mean?) He was indifferent, so I decided on pizza - because, duh. I picked up $5 Pizza and we hunkered down to watch the numbers start rolling in. Now listen, I live with a bunch of Republicans. I voted Democrat. I knew I was outnumbered & I knew that it could get hairy. As the results poured in - I had to listen to cheers & whoops of joy. My husband was using his calculator to determine which states Trump needed if he didn't win Florida or Texas or whatever. Inside, I was crying. I was frantically texting my friends & a small pocket of family members who were democrats. I knew it was over. I knew that the last 18 months of arguing with my brothers, my mom, my husband, my brother in law, my father in law, my sons, random people on fb - was all in vain. We lost. I lost. I felt like MY DAUGHTER lost. Is that crazy? Maybe. I knew it was over. My fellow women failed me! My husband and brother in law were happy. I was pissed. I wanted to cry. I yelled & ranted and raved about health insurance & gay rights & women's right to choose. I commented & "liked" and tweeted like a mad woman. haha. I went to bed knowing I'd have to face social media in the morning full of smug Trump supporters & defeated Hillary supporters. In true Nicky-fashion, throughout the day I managed to piss a whole bunch of people off: a friend of my brothers, an old high school friend, my brother, my husband again, other people I'm sure I'm forgetting, blah, blah, blah.

So here I am, post election. Butt hurt my chick didn't win. Irritated that everyone is mad at me. Eating 1/2 of a king size Hershey bar. #winning