Another Day, Another Shooting 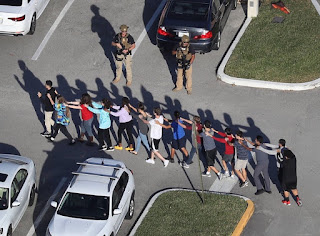 My first exposure to a school shooting that I can remember was Columbine. I was a freshman in college and I remember watching the news coverage and weeping. It wasn't long before that occurred that I was in high school myself. In a small close knit suburb, just like them. I couldn't wrap my head around how those poor kids must have felt. To not feel safe at SCHOOL, of all places. How absolutely horrific to be sitting in class one moment and the next you're on the floor, hiding and terrified.

Since Columbine in 1999 there have been 25 fatal school shootings - that includes elementary through high school. TWENTY FIVE in 19 years.

LIFE has become something entirely different.

I work for a large corporate healthcare organization. Part of our yearly employee training is instruction how to deal with disasters: fire, power outages, severe weather, bomb threats, and recently added to this list-active shooters. The first year they included this instruction it freaked me f*ck out. HIDE? You want me to HIDE? Where? I instinctively look around my work space and make a mental note of where I could hide, if I need to.

Do you know who else gets taught how to handle active shooters? OUR KIDS. We live in America. The greatest nation in the world, supposedly. Yet our kids are being taught how to handle an active shooter because this is a very real threat to our children. Yes, they need to know and it's good that we're preparing them. But how sad is it that this is even a thing. WHY are my children being taught to "run, hide, fight". We are not at war. There are no real imminent threats within the United States. Besides, the threat we impose to each other.

Something is wrong. We are failing. But where? Everyone has an answer.

I don't have an answer. I wish I did. But here's what I know: this is AMERICA'S problem.

2017 was the most deadly year for mass shootings in modern U.S. History. We (The U.S.) have 31% of the mass shooters - despite holding a measly 5% of the world's population. Another fun fact - while we are #1 in mass shootings, we are no where near first place for mental illness or suicides.

I am not here to take your guns. But something needs to be done. Some type of legislation needs to pass so that this stops happening. This is by and large an American problem. And it's a big one. But why?


I'm not going to beat around the bush and say that I don't think it's a gun problem. Because I do believe that's a big role. There is no other explanation. We have more guns than people. The ONLY difference between us and Canada, or the UK, or India (who is 2nd place for having the most civilian guns) is 1. The ratio of guns to people and 2. The laws that are in place to govern/not govern those firearms.

MASS SHOOTINGS ARE NOT A GLOBAL ISSUE.

I'm lucky enough to have five children. Four of them are boys. Three of them are white teenage boys. The exact demographic of your typical school shooter.

Tonight I took my four boys out for a Valentine's dinner. While I had them all trapped in my minivan I decide to talk to them about today's shooting. I started by asking them why they think teenage boys are doing this. If anyone would know, it's a fellow teenage boy, right? They mostly said they weren't really sure. They said maybe because they're bullied. Maybe because they're angry. My oldest said "Mom, I have literally never once thought about killing someone or myself so I have no idea why kids do this. But, ugh...I don't even want to tell you this because I know you'll turn this into something" (As I sit here writing that very "something") "Getting a gun would be SO easy. I know I could get one if I really wanted to."

Um. What? Yes. That's what he said. He thinks it's easy to obtain a firearm.

I cried. I cried my little momma eyes out listening to them tell me what they'd do. I cried for their new reality. I cried because their school could be the next school and school shouldn't be a war zone. I shouldn't send my kids to school and worry every day. I shouldn't send my kids to school and have them worry about getting shot every day. I shouldn't have to train them to know where their exits are and where to hide. We shouldn't have to arm our teachers to protect them. We shouldn't be teaching five year olds to remain calm and hold on to the person in front of them when they exit the building in the event of an active shooter. None of this is normal. None of it is right. This isn't what I consider to be our "great" America. It isn't even what I consider civilized.

Tonight, during a Valentine's Day date with my sons, I gave them some advice.

I told them if there's ever an active shooter they should play dead. Play dead, my sweet boys. And try not to cry or be scared. Help the other people you're with. But most importantly, play dead so you'll make it out alive... and home to me.