- June 24, 2018
Oy, it feels like it's been awhile! I usually get the urge to write when something political and/or awful happens. And there's been a lot of that lately. During those times I end up frantically writing things and now I have four different drafts on four different topics that I never finished. I get sidetracked or too busy or whatever. Usually any quick thoughts I have that go through this crazy mind of mine, I just type out in the form of a Facebook status update. Which, in turn, usually backfires right in my face and cause a bit of familial drama.*shrugs shoulders* but whatever. My mind is like a balloon and once it gets full of "things" I have to let it out or it'll pop. I've also been working on a series about our adoption experience. But those installments won't be published until that all is finalized. So I have definitely been writing - just not publishing much. Meh.

However, I was just thinking the other day about how the year is almost half over! Technically I think July 2nd is the halfway point. But that's just right around the corner! Can you even believe it?

It goes like this: July 4th, State Fair, back to school, apple orchard, Halloween, Thanksgiving, Christmas. DONE. Does anyone one else measure the passage of time this way? ha.

Then I started to remember the post I made in January about my goals. And I thought maybe it would be fun to do a check-in on those and see where I'm at.

So here's a recap! 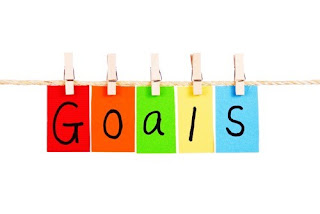 1. Contribute more to our 401's and savings accounts. - I like to spend money so this one will be hard. I work hard and so does Rob so we like to spend the fruits of our labor. And given the fact that my dad died so young I still harbor this "you can't take it with you" attitude. But, I need to knock that right off. In a sense, it's right. I can't take it with me, but my children can. And I want to set them up for success. Just because I was poor and just because I struggled, doesn't mean they have to. I want to help them pay for college, I want to help them buy their first car. I want to leave them something and I want to be able to give them things and do things for them in the future. I'd also like to retire at some point in my life and be comfortable. So this is one I'm going to really try to focus on.

This one is going great! I upped my contribution to my 401K which feels great. I also opened up a new ROTH account. So I'm also contributing a percentage of my income to that each time I get paid, but this percentage is done AFTER taxes are already taken out. So when the time comes to withdraw it, it won't be taxed. We also have been very mindful and steadfast in how much we are setting aside into our joint savings account. We aren't money hoarders. We don't have bazillions set aside and never will. We will not be inheriting any money or having any type of windfall. We make an honest living but we have bills and five kids, so yeah. Nothing crazy going on over here! But we have more than we had when we started this and having a good chunk set aside in our 401's (safe from our own spending habits - ha!) feels good, too! So I would say that this goal is definitely being reached!

2. Get into a consistent gym schedule. - I love working out. But I find it hard to leave my house to go. My husband and I work opposite schedules so there is no way I can go in the mornings before work because he's not home. I can't really go after work either because (omg) I have 5 kids. The best time for me to go is bedtime - after 830pm. Which is the ONLY time I get with my husband (before he goes to work) and my big kids (before they go to bed). I need to find a balance. And I need to be ok with maybe only going 2-3 times a week if that's what my life allows at this point.

This one. This one was going SO well. I was going to the gym about 4-6 times a week and it felt great...until about April. In April I fell down the stairs and injured my foot. I was in a walking boot for awhile and in a lot of pain, so I was sidelined for awhile. Right after getting out of the boot, we went to Vegas for a kid free vacation (which was AMAZING).  After Vegas the weather turned around nicely and I started going for runs or walks with my dog. I trained for another 5K which I did great in, and exceeded my own expectations. Yay, right? And then. And then. I don't know. I just sort of fell out of the routine. The end of the school year got super busy, we got another puppy, the pool started leaking, our basement flooded, we all got the stomach flu. ugh. You know, life. So I have had to harness that statement from this post from January "I need to be ok with maybe only going 2-3 times a week if that's what my life allows at this point.". I try to not beat myself up about it. I know I'll get back at it. But - life happens and I am ok with that but still very mindful that I am a better person when I'm moving my body and eating better. So all in all, I'd say I have been about 80% successful at this goal. Not bad.

3. Get the adoption started. - Robert is going to adopt the three oldest boys. We've been talking about it forever but now we are going to get that ball rolling. It's been just about 2 years since we've had any contact with their bio-father, not for lack of trying on the boys part. The county can't find him. He doesn't work. Has no known address. The list goes on and on. They deserve a dad. They deserve someone who has rights to them and chooses to be in their lives. Chooses to love them and care for them and teach them.

Oh! This one!! Right after this blog was published we reached out to a lawyer and started the process. So far everything is going great! It's taken about 6 months and will probably be another month or so before all is finalized. BUT - we are so close! Right now it's just a matter of getting a hearing and doing all the name change stuff. But 100% this goal is right on track and we couldn't be more excited! Like I said earlier I've been writing a series about our experience. It's been helpful with processing it all and also I hope it serves as inspiration or guidance for other families who may be exploring this option. It will be published shortly after all is finalized.

I have to say - I'm pretty impressed with how far I've come with these goals. I definitely wish I was doing better at the gym thing but I know I'll get back there. Self care is so important and definitely is something I skip out on way too often. So it does not surprise me that my goal of taking better care of MYSELF is the one I'm not doing as well on. #motherhood, I guess.

Maybe my goals for 2019 will all have to focus on self-care. Which literally sounds like zero fun. lol