- July 18, 2018
This has been a long time coming. We've waited years. And I know our story pales in comparison to some. But many people we are close with and even people who we are not personally close to, are interested in this story. And if I can even help ONE family through this, it will be worth it.

I am the mom of five kids. My first three are all boys from my previous marriage. The marriage was rocky, to put it mildly. We were young and had absolutely no business getting married, let alone having three children. Most of our marriage was spent with me leaving, and then coming back, it was empty promises of treatment and counseling, getting on medication, and gaining employment. I was immature. He was troubled and violent. We had three boys very close in age. It was over before it ever began, really. And after SEVEN separations, I finally ended it once and for all when the children were 3, 4, and 5 years old.

There was court ordered visitation and support. Neither was ever consistently followed.

Their whole lives the boys have always wanted a "real dad". Those are their words, not mine. Even when their bio dad was around. I would often hear "I wish I had a real dad." or "Why can't our dad be like other dads?" It was heartbreaking. I tried my best to play both roles, my brothers and uncles stepped in, too. But they knew and I knew that it was not the real deal. But we made the best of it.

I met Rob when the boys were 7, 8, and 10 years old. He was the first man I dated since my divorce. We took it slow and it took me awhile to agree to introduce him to them. Although, I remember him wanting to meet them sooner than I was comfortable with. I just knew that they would like him and I knew that they were starved for that male attention so I wanted to be really sure they were ready, and more importantly that Rob was ready. Those boys had been through SO much already and had lost so much at that young of an age, I was not about to let them lose anything else.

The first meeting went great. And slowly Rob started to come around more and was offering to watch them so I could run to the store or go to the gym. I never asked him to do those things, he offered. It weirded me out initially because I had never had someone offer to help. But I started to realize how much easier this parenting gig is when you have a partner. He was another voice to reiterate what I was saying. Another adult to help enforce the rules. Another set of eyes and ears.

For the very first time in my life- I had help. Consistent help from someone who wanted to do it with nothing in return.

Rob slipped into the father role with ease and with no prodding from me. It was something I almost resisted. Even during my short marriage I had always done everything: baths, bedtime, doctor appointments, work, shopping, cleaning, cooking, paying bills (when we could afford it). Now all of the sudden, I had this other person that was literally saying to me some days "LET ME HELP YOU."

I remember one time I was overwhelmed with the kids and work and life and he said "You don't have to do it all anymore, Nicky. Tell me what you want me to do to help you."

I couldn't even catch my breath. 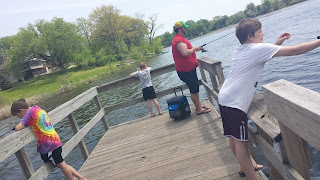 You WANT to help?

And so began this trend of having a partner. He didn't even bat an eye. He signed Zack up for soccer the first summer we were together with the intention of coaching his team. I panicked because he was already playing baseball, as were the other two older ones!  How the heck am I going to be able to work full time and get them all everywhere? I can't do it. Rob said "Don't worry. We'll just tag team." This guy was a natural! It was effortless. He was literally born to be a dad.

Eventually Rob moved in and thus began our life as a family of five. The boys would occasionally see their bio-dad. But he told me that if they had sports or birthday parties or any kind of scheduled engagement on his weekends, he didn't want to take them. Which meant he didn't see them during spring, summer, or fall, unless they had a weekend without sports or were on break from something. Even on their birthdays, they sometimes (maybe) got a phone call.  But soccer starts in February so - consistent visitation was maybe November to February.  Needless to say they spent most of their time at home with us and less and less time with their bio-dad. But nobody seemed to mind. We liked them home with us and they liked being home. Slowly the time with their bio dad got to be less and less, going months and months without seeing each other. The child support had always been sporadic and now with two incomes I didn't really need it and I definitely didn't want it, but that stopped, too. Rob never had an issue with pitching in money to help with any expenses. They needed new shoes? He'd buy them. Hair cuts? He'd buy them. Football cleats? He'd buy them. I never had to ask. He just did it. Never once did he complain about going from zero kids to three in the blink of an eye. His family even helped - if we couldn't make it games, or appointments, or if they needed anything, his family stepped in. From the start those boys were their family.

One particular day, the boys had tried to reach out to their bio-dad and couldn't reach him because he apparently got new phone number that he didn't share with any of us. They were frantically trying to text and call every number they had for him, trying to see if maybe one of his old numbers was working and each one was not. They were sad, angry and in tears. They felt betrayed and forgotten.

One of them looked at me through tear filled eyes and said
"Why can't Rob be our dad?"

Later I asked him if he'd every consider adopting the boys and he said he absolutely would if it was possible.

And so the seed was planted.