I received an email from our lawyer a stating that everything cleared and our next step is getting a hearing date. About a week later, she emailed me with the details.

I took the day off of work and in preparation for this day I made sure the kids all had outfits to wear and clean haircuts. I even bought myself a dress, which is something I don't do very often.

Rob and I wanted to get the big kids an "Adoption Day Gift" but couldn't really decide what to get them.

One day at work it kind of hit me, since we had moved to Cottage Grove they had wanted nice sweatshirts with the high school team name on them. They had also been forgoing putting their last name on any of their current athletic gear because they knew their last names would be changing. So after work one day I went to a local sportswear store and got them each a nice hooded sweatshirt and had their new last name put on the back. They looked perfect and I knew they'd love them! 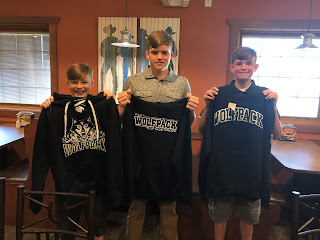 We invited our families to the adoption hearing but since it was a Monday, not many people could go. We weren't sure what to expect but we were happy that those who could make it, were there.

The judge presiding over our case shared a bit of information with us - he had also been a part of a Step Parent adoption many years ago. His wife had adopted his daughter when she was eight years old. So this kind of case was near and dear to his heart. I was thrilled to hear this. 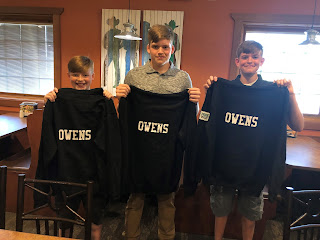 There aren't many families who have gone through this and I at times felt alone, or like people thought we were crazy. Maybe they didn't understand the why, but we had our reasons. Even my attorney, right before the hearing asked me what our reasons for doing this were. The older boys were almost 18, what was the point?

I was very honest with her -

I think parentage is so much more than DNA. My husband has raised these boys the last six years. He's been here every single day, paid every single penny, took care of them when they were sick, played with them when they were well, he has taught and guided them, yet if something were to happen to me, he would have zero rights to them. He was not technically able to make any decisions regarding their medical care or schooling. Yet the man on their birth certificate who they hadn't seen in almost three years, could. My father died young and that will always be with me, in the back of my mind. The thought of my babies being separated if something were to happen to me was too much for me. The thought of their bio-dad having access to any of my life insurance that would be left to those boys, killed me. It just didn't seem right - because it's not. Parentage isn't about who made the child. It's about who raises the child. 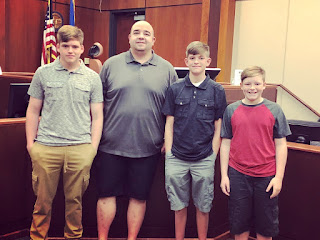 I had been crying off and on all day, but as soon as the judge said "Congratulations, Dad." and shook Rob's hand. I got choked up. It was a beautiful day. And those boys were so happy. They were finally where they belonged.