My dad passed when he was 43. He died suddenly from a stroke in his brain stem. We had zero indicators up to that point that anything was wrong, other than pressure on one side of his head which he thought was an ear infection and was seeing a doctor for later on that day. Later never happened. He was gone before his appointment that day.

As word spread, I distinctly remember everyone saying "He's so young." or "Only forty-three? That's so young!" I also distinctly remember thinking at the time "Yeah, he's young. But he's not that young." At 22 years old, 43 didn't really seem young to me. Even as adults, our parents always seem larger than life, don't they?

For the last 20 years I've said the phrase "My dad died when he was 43." more times than I can count. That age. That milestone. FORTY THREE. It's felt like a black cloud of doom for the last 20 plus years. It's felt like something that would happen to me, rather than something I would achieve. It felt, if I'm being honest, like a finish line. I didn't struggle with turning 30. Or 35. Or even 40. But 43? Absolute dread. This is the year I will outlive my dad.

I can say that 20+ years later I realize he was so young. He had a whole life ahead of him. He had a career he didn't get to finish. A wife he didn't get to grow old with. Kids he didn't see grow up. Grandkids he didn't get to see be born. He missed everything. And knowing all he missed is what I mourn the most. Knowing how unbelievably tragic and awful it would be if my kids lost me at 43 just makes it even more difficult for me reconcile what I went through. I mourn him and who he was, yes. But more-so I grieve what never was.

I booked a trip to Portugal for a few days and spent it with one of my oldest friends. I ate, hiked, walked, laughed, drank wine and met people from all over world. I lived. I did things I can't or wouldn't do if I was home. Ultimately, I decided to listen to that voice in my head telling me to really live 43. I took a chance on myself by doing something that seemed crazy and ridiculous and out of character and it ended up being exactly what I needed. 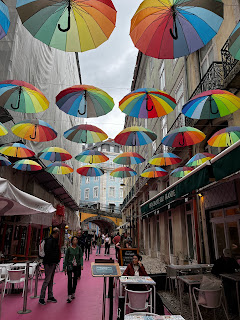